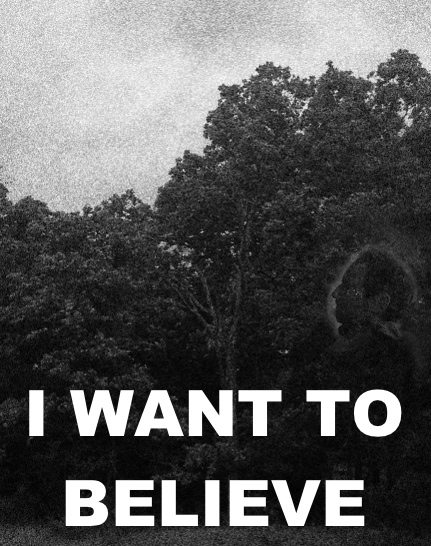 When convention and science offer us no answers, might we not finally turn to the fantastic as a plausibility?
– Fox Mulder, Episode 1, Season 1 of The X-Files

Unlike FBI Special  Agent Fox Mulder, extraterrestrials are not my thing.  I am not fascinated by the existence of other beings who may or may not be visiting us from their worlds (performing hideous experiments on us).  It’s the world that shadows our own that I find interesting.  Another plane, another dimension, the spirit world.

I have a very gentle ghost story to tell – but first – meet me, the skeptic: I am not a religious person, nor do I consider myself spiritual or even superstitious. Black cats are just sweet felines and I’ve walked under a ladder or two to no ill effect. Even as a child I knew that the Brothers Grimm’s stories that I loved were morality tales and not about ogres and witches; that there wasn’t a pot of gold at the rainbow’s end and that the sinister genie that visited my childhood dreams couldn’t really hurt me. I was and am a very practical person who searches for the down-to-earth explanation for things.  Yet some of my experiences have defied logical explanations.  Once, as a preteen, my siblings and cousins and I lifted one of us several inches off of the floor with only our fingertips and the combined chanting of, “stiff as a board, light as a feather.”  Laugh if you will, but it worked and it scared the shit out of us.  Or, what about those ethereal strands of shimmering light that floated past me while out for a walk one summer night; or the time a scruffy, bearded man walked out of the Nevada desert in the middle of the night to help my brothers and me bring a dead car back to life and return safely home.

And it’s not as if I haven’t had opportunities.  I spent my childhood sleeping in a bedroom where supposedly a woman had died in a fire, yet I never once felt even the slightest ripple from her spirit.  For several summers, I made trips to the Lilydale Assembly in New York State to sit in on “message services” where mediums call out to audience members with greetings from those who have passed on.  Each time I was there I eagerly awaited my message, but none came.  Surely somebody out there wanted to share something with me?  Kel went to Lilydale once with me and was called on twice.  So either there is no “there” there, or I have a protective shell – a kind of spirit-resistant lead-coating, perhaps – that deflects contact from beyond.  Despite my apparent lack of spiritual attraction and my innate skepticism I can acknowledge this, however: I don’t know. I don’t know how we got here, I don’t know what’s “out there” and I don’t know what happens to us after we slip away forever from our loved ones.

Now, for the ghost story.  Sometime very late on May 12 or perhaps when it was just barely May 13, long after even the crickets had quieted, I was still unable to sleep. I couldn’t get comfortable, thoughts were racing in and out of my head; I had a lump in my throat.  I was hot and then chilled. I finally settled into a comfortable position and then – as happens when our minds drift and calm – my sense of time and place slipped away.  I wasn’t in any place.  My brother was in front of me. I asked him if I could hug him and then I felt him in my arms. I could feel the weight of his chest against mine, feel his strength and solidity. My fingers rested atop the muscles of his back. I placed my head on his shoulder and he rested his on mine and as he did, I heard the words, I love you, Ann. I don’t say that he whispered them because that isn’t right – it was what I heard and felt – soft and quiet – not sound as I understand it in the waking world.  And then all of a sudden, I caught a glimpse of something rushing by me, just at the edge of sight. It slipped by me so quickly and then my arms were empty, truly empty. My brother was gone. I woke up or perhaps my level of consciousness changed and my first thought was: he was here. It felt so true. I fell asleep knowing he had visited me.  Since his death, I’ve had many dreams about my brother, but this was unlike any dream I’d had.  The frightening thing about an experience like this isn’t the idea that some essence of my brother is roaming the ether – it is the thought that it may never happen again.  What if that was the one and only time I again feel his presence?  If so, then it will be just one more thing about him to miss.

It’s not much of a ghost story, really, is it? Later, in the light of day, my practical and skeptical side made suggestions about what had occurred. My brother’s visit could have been a vision produced by the anti-inflammatory drug I was then taking for a shoulder injury. The warning label was about a mile long and quite possibly hallucinations were one of the many side effects.  Perhaps it was a dream offered up by my restless and grieving mind as a means of comforting itself and me. Our minds are so powerful that they sometimes show the eye something that isn’t really there – like the day I saw a baby reaching up its tiny arm as it lay in the middle of a busy road. I lurched towards it and when I looked again there was no baby. Just a crumpled brown bag being blown about.

So, no, I don’t believe the adage that seeing is believing. But feeling something – having one’s arms around it – that’s real. I felt my brother. So maybe my lead-lining isn’t impervious.  Maybe my brother had found a way to reach across the murky twilight between the living and the dead to put his arms around me and to let me know that he loved me.  This is what I want to believe.

Suggested reading for my fellow skeptics:
Spook, by Mary Roach
Incognito: The Secret Lives of the Brain, by David Eagleman
The Believing Brain: From Ghosts and Gods to Politics and Conspiracies—How We Construct Beliefs and Reinforce Them as Truths, by Michael Shermer

41 thoughts on “I Want to Believe: A Ghost Story”