I hadn’t planned on posting anything this weekend, but nostalgia caught up with me, as it often does as I get older. Below is short essay I wrote yesterday – a sweet memory – as my thoughts kept turning to my family, some of whom have passed on. Unfortunately, I do not have photos from the day that I describe, but I’ve included one from that year, 2004, in which I spent four months working in Baghdad as part of the Coalition Provisional Authority. That experience colored Independence Day of that year and had a profound effect on my life.

The last formal display of fireworks I can remember seeing was in 2004, not long after I’d returned from a short stint in the Green Zone in Baghdad. Patriotic feelings were especially strong in me. Living in, experiencing life – albeit an artificial kind of life – in a war-torn country taught me about the uniqueness of America better than any lecture or textbook. What I experienced was confirmation of what I had previously believed only on faith to be true: that I had been blessed to have been born here. 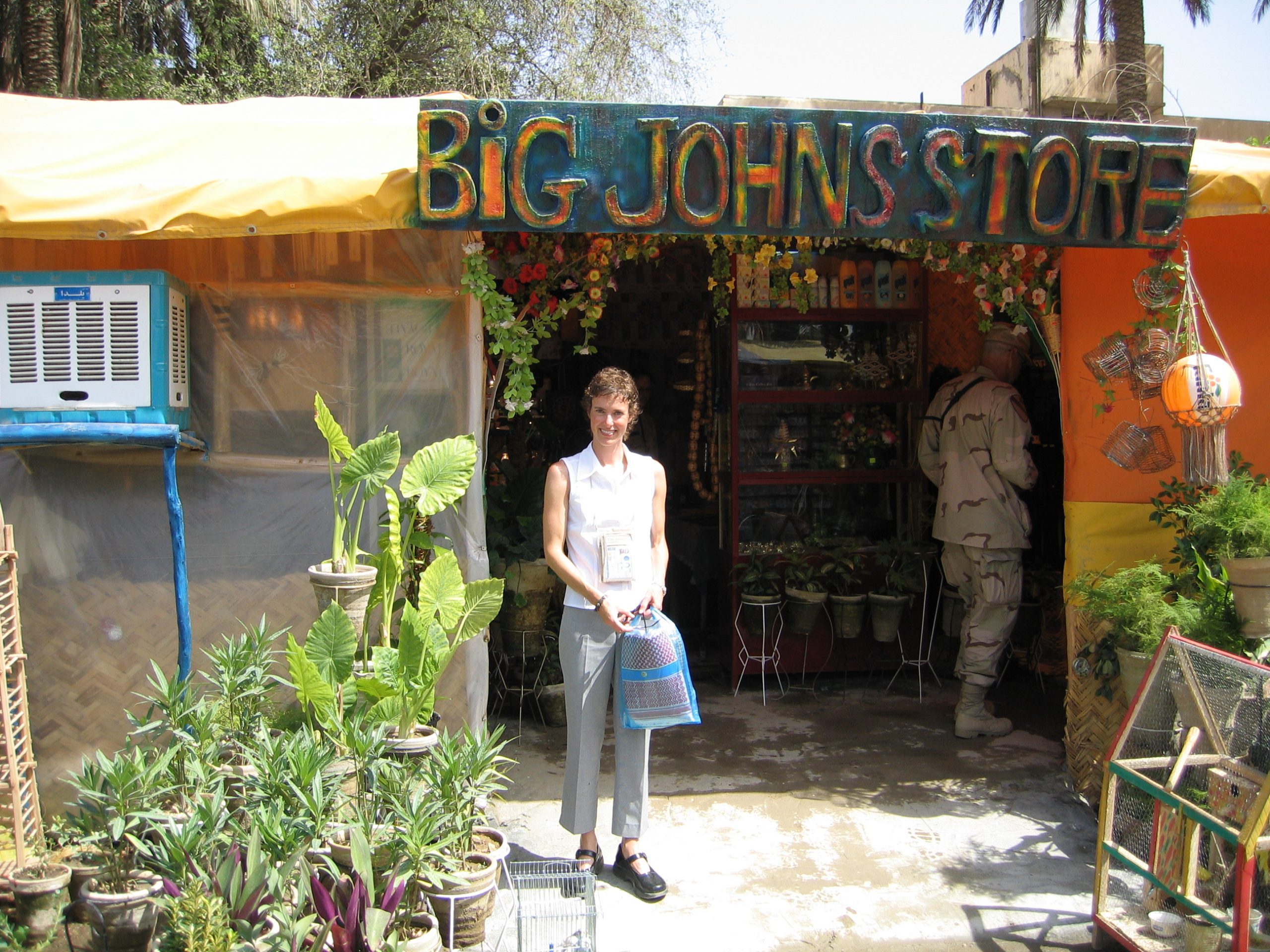 No matter where I am, I can find a place to shop. This is at the open air market in the Green Zone.

I was with my mom, dad, and brother at my parents’ lake house, reveling in their company, loving them with an especial tenderness. We all eagerly anticipated the holiday and prepared throughout the day for the evening festivities. The ritual of grilling, buying and shucking corn, filling the cooler with ice and beer, baking a pie, were performed with an ease born of long practice. Several days before, mom had hung the red, white, and blue bunting from the railing of the front porch.

As the sky dimmed and the sun slipped away, here and there, small points of red light began to glow along the shore of the lake. By nightfall, the water, at least as far as our eyes could see, was completely encircled with lighted flares. We had lit our own long before and tended them, replacing as needed so as not to break the circle. The adults of our small community sat in lawn chairs and chatted while children were drawn like moths to the sputtering flares. There were sparklers fizzing and small firecrackers popping, the smell of sulfur and saltpeter.

Suddenly far across the lake in the black sky above a small town unseen, a singing zoom followed by a large boom resonated across the water. The opening salvo. For the next half an hour or so, we all sat transfixed, necks craning, by the flashes, ear-splitting explosions, and colorful blooms of light – oohing, ahhing, and clapping. Each burst a surprise. For that brief period of time we were all tuned into the same frequency. Our hearts were full with love of family, of community, of country. The fireworks ended and the flares slowly died out, turning the lake and the shore back into inky mystery. We gathered our chairs and plastic cups, said our goodnights, suddenly exhausted.

So much has changed since then. Both my mother and brother are gone. A long-simmering unrest has burst into open flames in several cities around the country. For months, fear of a virus has been used to control our actions and imprison many of us in our own homes, adding another divisive political issue to a depressingly long list. This year, perhaps the strangest year of my 54, there will be no fireworks in many places. The sense of unity and community that these kinds of patriotic public gatherings once engendered has been extinguished, fizzling and winking out one-by-one like the flares along the shore.

6 thoughts on “A Memory of Fireworks”